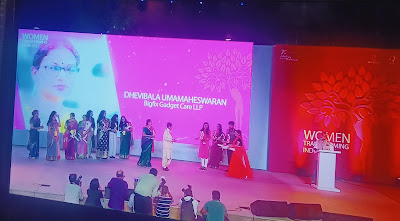 On the fifth edition of the Women Transforming India (WTI) Awards organised by NITI Aayog, 75 women achievers were felicitated in a ceremony held in Delhi on March 21.

Bigfix co-founder Dhevibala was among the honorees, for having developed a service management platform. She has been instrumental in transforming the livelihood of small repair shops and blue-collar technicians.

Dhevibala was born into a middle class family. Her family culture stressed that just having a degree for oneself was not enough, but that knowledge must be used for the benefit and up-liftment of the society as a whole. This global perspective is the foundation and inspiration on which she finished Masters in Computer Application (MCA) from Meenakshi College, Chennai. She turned entrepreneur by owning a Nokia Care franchise in 2009 and running it successfully. After Nokia, she founded Bigfix in 2015 and in 7 years the company established an alpha position in India.

Today Bigfix sources work from leading oem brands, ecommerce and insurance companies and gets them executed through service partners staffed with skill sector certified technicians. More than 8000 technicians have been skilled and deployed through the platform. Bigfix is seed funded and manages to register 30% year-on-year growth competing with the well funded majors in the industry.

Popular posts from this blog

Computer Laptop Repair Service Near Me

By Umamaheswaran February 22, 2020
Today, the world has been known to be a digital world, a person cannot imagine his or her life without a laptop or PC. This is the major reason why the repair service companies have become very relevant and offer a host of services to customers. Computer Repair Technician , Desktop Support, IT Technician and Support Technician are all job roles that fulfil the need for these skilled IT workers. The specific duties and responsibilities of these roles can vary based on the requirements of the specific organisation Installing PC Hardware Installing PC Software Computer Repair Maintaining equipment Providing desktop support Troubleshooting a vast range of computer issues Configuring computer networks We at Bigfix.in, help you find the best technician in your neighborhood. We ensure that the technicians are certified and verified to perform the task to your best satisfaction. Book a Technician, Now:  https://app.bigfix.in/quickrepairorder/
31 comments
Read more

By Umamaheswaran March 25, 2021
We at   Bigfix   have grown a   Pan India network  of service centers and equipped them with our SaaS Application. This helps our partners to automate, professionalise and manage lifecycle of installation & repair orders. Our partner network includes: 1. 800+ Authorized Service Centers representing all major brands to handle warranty repairs in every major State/District/City in India. 2. 1500+ Independent Service Centers to handle out of warranty repairs of consumers devices, electronic gadgets and computing devices. 3. 3000+ Individual skilled, certified and verified technicians to perform doorstep installation and audit services. Alliance Partnerships We provide end-to-end support capabilities extending from customer relationship management to problem resolution and reporting. Our clients include OEMs, E-commerce, Large Retailers and Assurance Companies.  We have developed a advanced CRM for customers to load, manage, track and pay for orders. Our network has a coverage of 18000
Post a Comment
Read more